“Houston, we have a problem.”

These are not the first words you want to hear when you’re just waking up in an idyllic  anchorage. We had had a perfect sail from Dinner Key to No Name Harbour on Key Biscayne the day before. That evening we had celebrated our anniversary with a dinner of grilled snapper, a pitcher of sangria and Key Lime pie (not as great as Joan’s, but it did in a pinch).

We sat on the balcony of the Cuban restaurant overlooking the anchorage and, as the sun set into the midnight blue water, we kept an eye on our boat and listened for sounds from Angus and Charles who were babysitting themselves that evening. All was quiet and still. I took advantage of the Wifi to have a brief Facebook catch up with my sister, Elena.

We chuckled as we recalled the antics of Angus or “Houdini dog” during our stop here two years ago. We had gone to the same restaurant for supper. Just as we were getting into the dinghy to motor back to our boat, Bob looked over at Windsong and saw something white and fuzzy sticking out of the top of the boat. “Is that Angus?”

And indeed it was. We couldn’t believe it. He had somehow managed to jump into the V berth, crawl on top of whatever was in there and pop his head out the hatch to look for us. Of course, he was younger then.

We have many fond memories of this anchorage, which is an easy walk to a beautiful beach and the Cape Florida lighthouse I so enjoy photographing.  We were hoping to stay a few days this time. But it was not to be.

Bob had woken up before me and was checking the voltage of our batteries, which had been fine during the day, but low before we went to sleep.

Dead as doornails. Which meant no power to keep the fridge and freezer cold, no VHF radio and no juice to start the engine. There was no wind, so we could not sail anywhere. We were stuck. Not Gilligan’s Island stuck, but stuck.

We needed a boost or a tow, depending on the state of our batteries. This was a job for Boat U.S.! Figuring we should be prepared for such eventualities, we had purchased Boat U.S. insurance (CAA for boats) before we left Canada. Tows can be very expensive ($600 is not uncommon) so being insured is a no-brainer.

We didn’t hesitate to call Boat U.S., and, within 45 minutes, Matt showed up with his tow boat to rescue us. You could tell that he had done this many many times before and his professionalism certainly inspired confidence. First, we tried booster cables, but the batteries were totally fried. A tow it was to  be. Matt tied us on to his boat with a line and proceeded to lead us back to Dinner Key.

We had called ahead for a slip and for docking assistance, and since we were familiar with the marina, we knew where to find Slip 46 on Pier 2.  Entering the channel was not a problem. The tricky part was docking with no power. Once we got into the fairway, Matt moved from in front of us to beside us and pushed us into the slip from the starboard side. 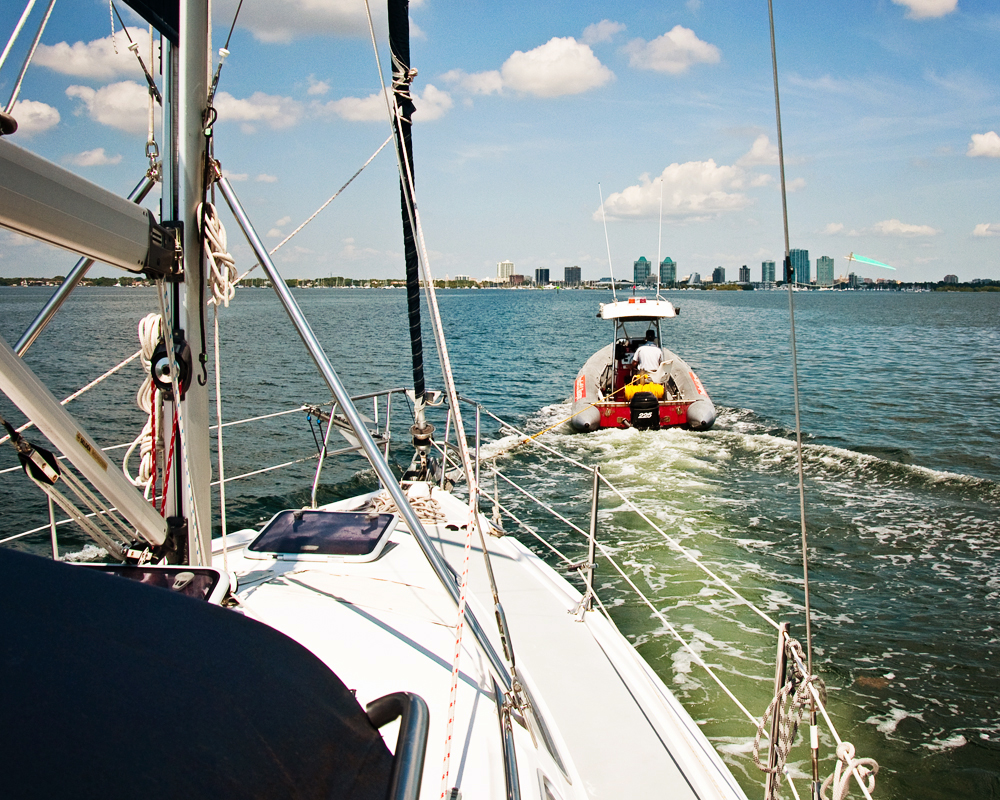 Bob steered the boat and I threw lines to our helper on the dock and fended off the sailboat to our starboard side as the bow of Windsong II veered in that direction.  It was a bit hairy, but everyone pulled together and we docked without incident.

When we bought the boat, we knew the batteries were old, but we hoped they would last at least for this cruise, so we could replace them all next fall. And we had been using shore power to keep all our systems powered up. As it turns out, the batteries had nothing left to give, so we are now in the process of replacing them with fresh new batteries.

We’ve decided to go from three batteries to four batteries, which requires some additional wiring. So, all together the installation takes about a day and a half, and then we’ll be on our way again. Take 2!

8 thoughts on “Getting all charged up”