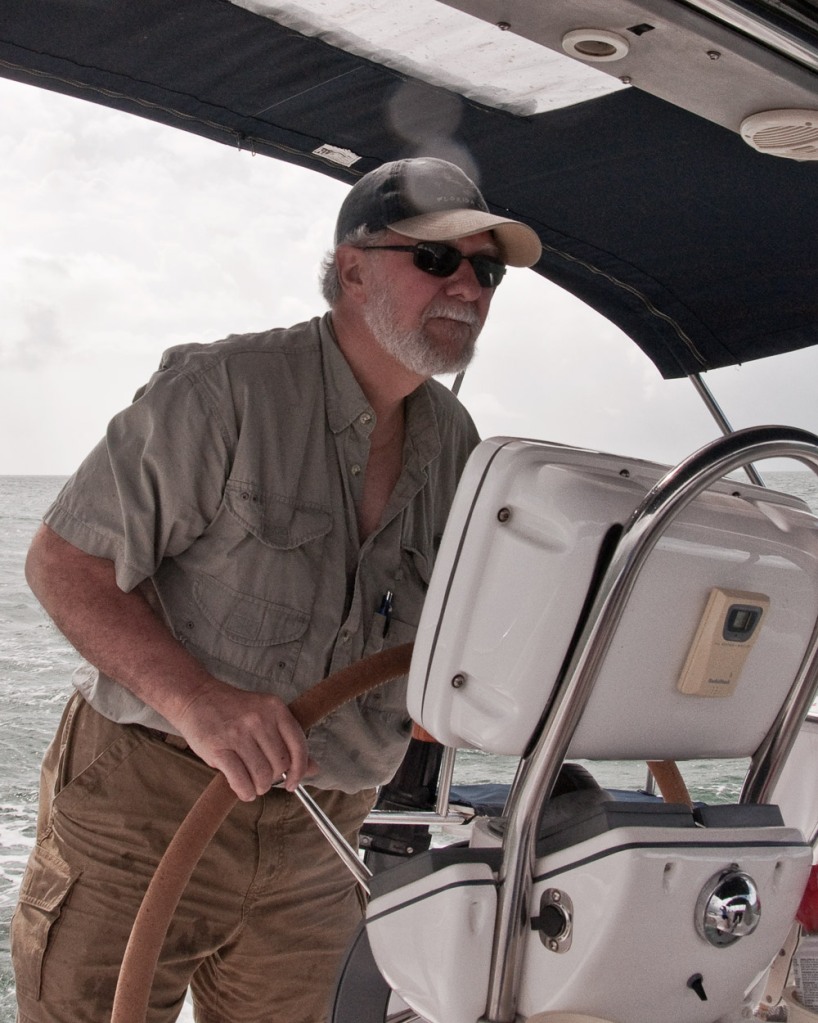 Yesterday was our first opportunity to try close-quarters manoeuvring under power with our new boat. Bob had helped sail the boat from Fort Lauderdale, but we decided to wait to try moving it and docking it under power until we had an experienced hand with us.

A wise idea, I think. It is never a bad idea to get a little training when you’re dealing with a 14,000-pound vessel.

And while Bob has many years of experience on other boats, the situation here presents a range of new challenges. For one thing, this new boat is much bigger and heavier. If not properly controlled, it can do a lot more damage. It also has an inboard engine in contrast with our previous two sailboats, which had outboard motors that could be steered.

In addition, most slips in Florida have a very short finger dock with pilings at the end, a big change from the docks we’re used to at home, which are longer. We need to be able to back into this type of dock so that we can get the dogs on and off the boat easily and safely.

Sailboats have a well-deserved reputation for being very difficult to back into a slip. Not only do they have a small engine and propeller in relation to their large size, but they also have something that’s called “propwalk” that causes the back of the boat to veer sideways as soon as the boat is shifted into reverse. Lots to get used to.

So, being responsible boat owners, we contacted the Coconut Grove Sailing Club and asked them to suggest a trained instructor who would be willing to coach us on our boat. They linked us up with Bruce Penrod, a super-experienced instructor and boat captain, who offered to provide several hours of customized lessons. Bruce, a retired school teacher, has made many long single-handed voyages on his Hunter Legend. Originally from Pennsylvania, he and his wife now live in Miami. He also happens to be a yacht broker.

Bruce managed to instill confidence right away with his calm approach and solid tips. He reinforced that it was always best to take it slow. If a docking manoeuvre isn’t working out we should just abort it and start all over again. Better do it more than once than panic and botch it up.

He suggested that we first motor out of Dinner Key Marina into Biscayne Bay, where we could practise low-speed turns and stops and backing up in a straight line, without having to worry about being close to other boats. He wanted us to get a sense of how our boat performed and get familiar with its glide zone, for example. (The glide zone is the distance it takes the boat to stop when the forward thrust is turned off while advancing at the minimum speed to maintain steerage.)

After that, our plan was to spend some time practising backing into a slip at the club. Wouldn’t you know it, though, the skies — which had become pretty gray over Biscayne Bay — decided to open right at that moment. We got drenched! So we reverted to Plan B, which was to have a nice lunch at the Club and wait until the rain passed. It was a good thing that Bruce knows the entrance to the club like the back of his hand, being a member  and having his own boat there, because visibility in the downpour was pretty bad. We tied up at the dock and Bruce proceeded to give us a tour of the club. (My camera battery died earlier in the day so I couldn’t take any pictures of it, sadly.) But trust me, the view from the restaurant balcony is just lovely.

When the rain stopped, we spent another half an hour practising docking at Coconut Grove. The main lesson here was learning how to deal with propwalk. In our boat, because of the direction  the propeller rotates, the propwalk is always to port. So you have to learn how to plan for propwalk when backing in. This meant going a ways past the slip before starting to back in.

After that, we headed back to our slip at Dinner Key to finish up with further practice backing into our own slip. We also learned how to handle the lines in all different wind conditions.

Bob felt more confident than he expected to handling the boat and was pleased with the way it handled. Although it is three times heavier than Windsong, it was very responsive. Of course, this boat is much less affected by the wind than our smaller boats were, and it turns better. A lot of the boat-handling techniques used with the little Hunter seemed to work as well.

We lucked out in finding Bruce, who was a patient, calm and reassuring teacher, and a great communicator. We may work with him again on other aspects of sailing.