After a fabulous day sailing, we arrived at Greet Turtle Cay at 5:00 pm. We had radioed ahead for a slip at the Green Turtle Club. As we made our way into White Sound Harbour we got a little close to shore because the rough weather had moved some channel markers.

We were all very happy to get our feet on dry land again, especially Charles! I jumped off the boat with him to take him to shore and he was super relieved about the whole business, if you know what I mean. The humans were all eager for a cold drink and a shower and a good meal. After getting settled in and having a tour of the beautiful marina and popular dining room and bar, Bob BBQ’d up some T-bone steaks for the two boys and they totally enjoyed them with fried onions, baked potatoes and corn. We hit the sack at 9:00 pm since we were still catching up on our sleep.

The winds forecast for the next two days were 35 knots so we were happy to be in a snug harbour. We chose to be in a slip since it is quite a challenge to be anchoring out and dinghying Charles back and forth in bad weather.

So we took this opportunity to see a little of Green Turtle Cay. Mike, who was at another marina down the way, came over and we all piled into a golf cart to do a tour of the island. New Plymouth,  the settlement, is on the southern tip of the mile long island, which is home to only 500 residents. Most are descended from Loyalists to Great Britain.

Pineapples — a cute quiet spot by the water…

After checking out a few secluded beaches, we headed to the Leeward Marina for a delicious fresh fish lunch with Mike and then toured around New Plymouth after lunch stopping to get some special Bahamian rum for $9 in the liquor store.

We left the road and Mike directed us through bumpy jungle trails to a charming spot by the water called Pineapples that held many great cruising memories for him. We enjoyed a rum punch there and then headed back to the marina to check the weather. This was my first opportunity since we left to check emails, check weather sites and get a post or two up, so I tried to take advantage of it.

In the next leg of our journey we were headed to Marsh Harbour and we needed to go through the Whale Cay Passage to do so. What this means is that we would have to leave the Little Bahamas Banks through a cut and go into the deep ocean waters for about three nautical miles and then come back in and continue our journey on the Banks until we reached our destination.

The Whale Cay Passage is infamous for the danger it can present to boaters about 20% of the time. It has caused more lives and vessels lost than all other areas in the Bahamas combined. You have to treat it with great respect.

You have to watch the weather and tides carefully and listen for reports of others who are going through in order to make an informed decision about whether to pass through on any particular day.

Over time, 20 mph winds from the North, Northeast or East can produce swells that make the Whale dangerous. Once the winds have been blowing for a day or two from any of those directions and then abate, it can still take a day or so for the wave action to settle. This is called a “rage”. From a distance, using binoculars, a rage looks like elephants dancing on the horizon.  A rage is obviously not a good time to cross the Whale.

Every day all four of us would look at weather reports, talk to others and evaluate what would be a good day to go through the Whale. We were prepared to stay a week if necessary but we were hoping to push on sooner. From these discussions it appeared that Saturday morning would offer a weather window and high tides to transit the Whale. 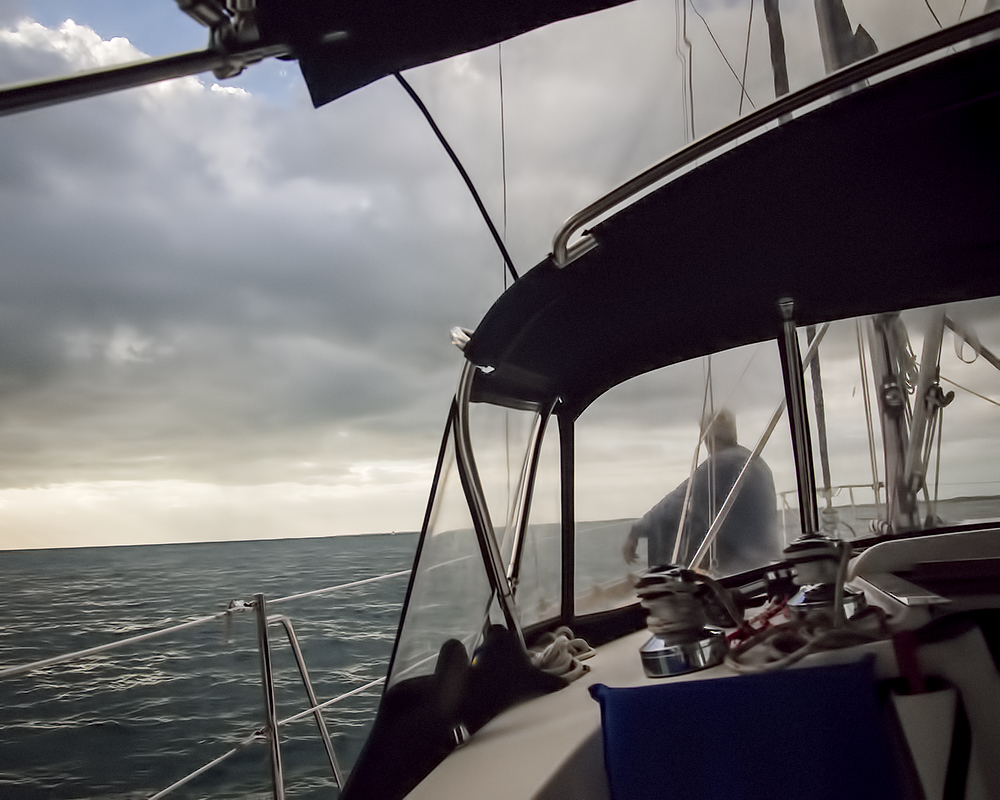 As we enter the Whale Channel, Leo keeps his eye out for elephants!

Charles is serene as we approach the Whale.

This is the GPS screen on our plotter showing our route through the Whale Cay passage.

A motor vessel, Rambler, which we had met in the Green Turtle Marina, was about two miles ahead of us entering the Whale. He radioed back as we proceeded and indicated a favourable passage.

He was right. The wind was less than 10 knots from the southeast. The waves in the Whale were 2 to 3 feet so conditions were very good. It was a smooth and comfortable passage. When we got out into the ocean, the waves were bigger (4 to 6 feet) but with a dominant period of 42 seconds, it was rolly but not unpleasant. I managed to get some pictures and take some video of Mike in the Casey Dee.

We then turned back onto the Banks coming through the Loggerhead Channel and into the Ship’s Channel. It was then smooth sailing as we crossed the Sea of Abaco and we arrived at Marsh Harbour at 12:30 pm. No slips were available at the Marsh Harbour Marina so we anchored out nearby. I handled the helm while Bob set the anchor. We managed a calm and polite anchoring process.
Thanks to everybody who has been following us. We really appreciate getting your messages of news and encouragement!

15 thoughts on “Through the Whale…”